"Sweet Red Bean Paste": Each of us has our own significance of living When I was watching the Japanese film "Sweet Red Bean Paste", the tears coursed down my face. In fact, this is not a sensational work. It is just plain, even trivial, telling everyday life through the lens.

In a good film, the emotions will gradually progress, and will change and develop, until the end, like a wave, without ending.

"澄沙之味" is a Chinese translation of the name. In fact, the Japanese film name is more concise and clear. There is just one word, which means bean paste.

It is a story that starts with dorayaki bean paste.

A down-and-out middle-aged man runs a small store specializing in dorayaki. The only customers are nearby residents and high school students. One day, when the cherry blossoms are falling all over the sky, Ms. Tokue, an old lady in her seventies, walks along the street, hoping that middle-aged men could hire her to work in the store, and she would make very delicious bean paste - this is impressive to him, and also convinces the customers. After hiring her, the store's business suddenly becomes hot, and people line up to buy dorayaki.

It is a very simple story, which has nothing to do with the grand theme of salvation and redemption. It is just ordinary encounters and daily routines. In addition to the unusual setting of leprosy patient, the old lady's hands are a little disabled, and there are ugly scars on the fingers and the back of the hands. These are the sequelae of leprosy.

This is the first time I have learned about this disease. I search after I have watched half of the film. Then I find out that this history is not that long ago. Only 20 years ago, this group was still completely isolated. People have a little knowledge of this infectious disease, and change their face after hearing that.

As early as the teenage years, the sick Ms. Tokue was taken into the isolation area by her relatives. Since then, most of her life has been consumed here. It is difficult for outsiders to imagine her situation and mood. Disease takes away health, dignity, freedom, everything. No, it's not only the disease, but also the world's ignorance, are the sharp swords that pierced her - after hearing that the old man who made delicious dorayaki is a leper patient, people who enthusiastically patronize the small store no longer come. 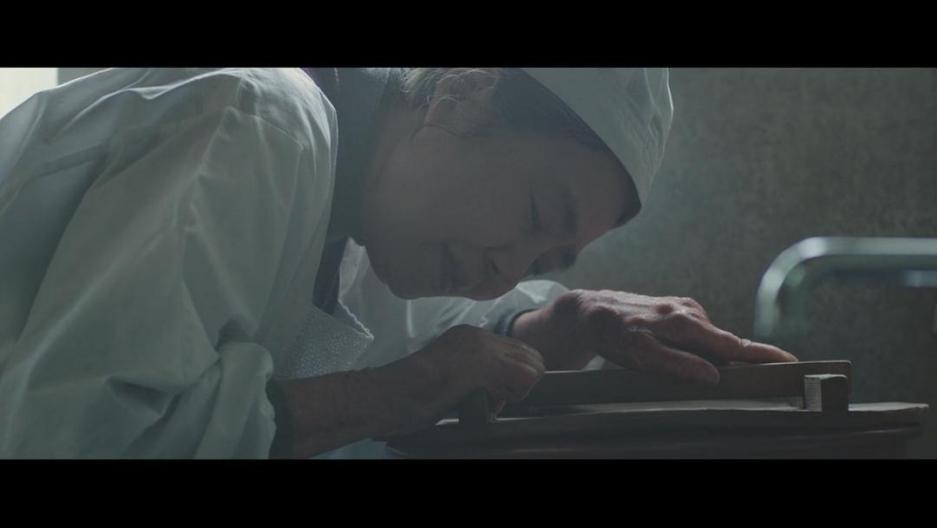 Overnight, the small store crowded with customers became empty. Ms. Tokue asks in anticipation, why are there no guests here today? The next day, she leaves a letter to the store manager and leaves quietly.

The film handles very well the way Ms. Tokue leaves the dorayaki store. She silently retains her dignity. I like the words in her letter: "Sometimes we have to be wise to handle all this." In fact, she knows all. She has responded thoroughly and calmly to the harm done by the world. Although she has been imprisoned for most of her life, even though she is still imprisoned in the prejudices of the world after recovering from illness, after gaining limited freedom, she basks in the sun, smells the fragrance of flowers, listens to the birdsong, fills herself with happiness, and releases kindness to everyone around her, and inspires each of them.

Later, the store manager learns that the reason why Ms. Tokue wants to work in his store is because she sees his pain and despair, and she sees right through him. He has done a lot of wrong things in the past, and he has also been in prison. As a released prisoner, like Ms. Tokue, he belongs to a marginalized group of society. He is forced to run a store that does not belong to him to pay off debts and makes dorayaki that he does not like to eat. In the end, he cannot even run this small store anymore, and his life is really gloomy and desperate.

However, Ms. Tokue says: "Each of us has our own significance of living." These are the words of a person who has been deprived of her life, which are particularly shocking.

At the end of the film, the manager leaves the small store that does not belong to him. At this time, Ms. Tokue has passed away due to illness. He sets up a stall selling dorayaki under her favorite cherry tree during her lifetime.

When he peddles at the top of his voice, the haze in his eyes has been swept away. He is inspired by Ms. Tokue and feels that the future is still promising, and his life is still going on. He has no reason to fall into the past any longer.

This is not a film about forcibly preaching and deliberately healing. Healing comes unexpectedly. At the end, you will believe this: after witnessing Ms. Tokue's last life and accepting her last gift, he has no reason to return to the hell of life again.